William Walker Esq, a merchant from Whitehaven who acquired his fortune during the Napoleonic wars, bought the old Garrengill House and land from Lord Longsdale in 1798. The house was situated at the west side of Garrengill, and he lived there with his sister Anne.

At this time the hamlet consisted of the mansion house, stables, servants quarters, a school/chapel all the houses had its own water supply, there was also a public toilet for Ladies and Gentlemen!

The estate had its own water powered mill on Distington Beck, in the woods south of Colin Gate Farm and this mill worked until the 1950s.

Both William and Anne had a keen interest in botany, and fine arts and travelled the world in search of such unique pieces.  William and Anne were travelling to Italy on the Brunswick when it came under attack from a Spanish corvette called Pronte in 1819, William was fatally wounded, and although badly damaged the Brunswick did make it to Italy.  Anne now her brother’s heiress was brought home aboard a Royal Navy Frigate commanded by Captain James Robertson R.N.

Captain James Robertson married Anne Walker at St Nicholas’s church in Whitehaven and he assumed the additional surname of Walker, he became High Sherrif in 1841 and on 16th of October 1845 he performed the foundation stone ceremony at Christchurch Whitehaven.

When Anne died, James inherited the Gilgarran estate, he soon remarried his cousin Catherine a woman some 37 years younger than he.

During the time of building the new Gilgarran Mansion, William Walker worked the Gunnerdale Colliery in 1805, the pit was 19 fathoms to the Yard Band, this was as part of what came under the listing of “Old Gunnerdine Colliery” which ran from old Gunnerdine level at Prospect, via Stubbs Gill, Glaister Moss and Mar Yat to Castlerigg or Rugards.

In 1830 Captain James Robertson Walker sank 3 pits to the Yard Band at depths varying from 10 to 20 fathoms, he also had 6 cinder ovens (coke ovens).

No 1 pit was situated 200yards north of Home Farm. Reputed to have been filled with household rubbish in recent years.

No 2 pit was a further 200 yards north of No 1 down the valley behind Struthers Wood, this pit having a six quarters seam at 126 feet and a four foot seam at 432 feet. Between No 2 Pit and Struthers Wood on the west side was the six coke ovens.

In 1832 Captain Robertson Walker had also worked the Main Band at Whinbank Gilgarran. This pit was later mined by Mr Ralph Tate from 1843 to 1853 when work ceased due to lack of finance. Mr Tate also mined at Commonside Colliery in 1859 and had a lease on Hayescastle Colliery from 1863 to 1872, following which Mr Tate disappeared from the mining landscape.

1872 Messr. Mackenzie and Main were the next company to mine in Gilgarran, re opening the old Yard Band Pits, finally abandoning operations in 1875. The Mackenzie’s of Prospect House were cousins of Captain James Robertson Walker

This company sank a total of 17 pits at Crossfield with the lease expiring on 24th June 1893, at this time there were only the Mackenzie’s with J.Main as their manager, and it was these who worked the Gilgarran colliery in 1872.

The developments at Crossfield brought about the end of mining in Gilgarran.

When the estate of Gilgarran was wound up in 1951, Captain James Robertson Walker Esq uniform was dispatched to The Royal Maritime Museum, where it was displayed until 1972. It now remains in storage.

In the grounds of Gilgarran house there were two monuments, one an urn with grapes dedicated by Anne Walker to her brother who died on the “Brunswick”. The second was dedicated to Captain James Robinson Walker, by his second wife Katherine. Both are now in the grounds of Distington Crematorium. 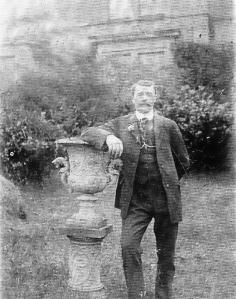